Renovation to an Inner City Queenslander

Over the last decade or so, I've witnessed a lot of change here in West End. The number of houses on blocks over 400 m2 have become few and far between. Many of the larger blocks ended up in the hands of developers whom sub-divided and filled in the vacant land with more dwellings. So, so sad....

This is an example of a worker's cottage on a double block:

I would kill to have this much land only 2kms from the Brisbane CBD. This house has been a rental property for many years and when it recently sold, I suspected that it too would end up being sub-divided with a house or units built at the rear (which, unfortunately, is exactly what's happened to other homes in this street.)

But to my surprise, this property was purchased by a young family who have kept it intact. They too have enlisted the team from Owen and Vokes to design the alterations and additions to this original Queenslander house. As with many of their projects, the dwelling has not been raised or visibly altered from the street. 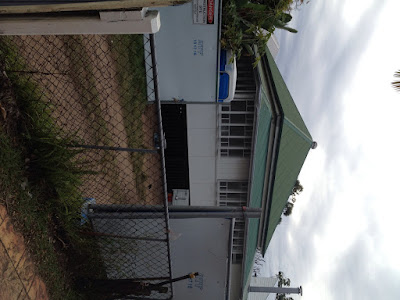 Here is a picture I took only a few weeks ago. (It still looks a lot like a construction site - they are currently working on the hardscape landscaping features, such as masonry walls and fencing.) The exterior looks much the same, however it has had a new lick of paint, including all those hopscotch windows - poor painter...

And here is a glimpse of the new front steps leading up to the entrance. The rickety old timber stairs have been replaced by a new masonry set, which I think really grounds the house. They will look fabulous once they're all cleaned up.

As you can guess by now, the owners have adopted O+V's signature black and white exterior. But  wait until you see inside - there are some lovely splashes of colour in the bathrooms and sleepouts. And no - it doesn't look like a "licorice allsort."